Note: My 2012 self wrote this. It is a little dated and does not entirely capture my current beliefs and attitudes, although I have to say it’s not too far off either. As of 2018, Me and Facebook is more relevant.

I’m not restricting myself to painstakingly thoughtful comments that attempt to build upon and transform the post to form an interesting conversation, the kind English teachers are hellbent on promoting. Sure, I get the most kicks out of those, but I’m not picky. Even single-digit pageview bars or a handful of Facebook “like”s give me buzzes of excitement.

It’s a guilty feeling, because I also think that that these are unimaginably cheap internet currencies and should not qualify as “meaningful” under a rational mindset. I strongly suspect visitors accidentally click on my blog and leave after five seconds without taking in anything, because I do that all the time to other people’s blogs and sites. Sometimes it is out of boredom, sometimes it is because I actually have something of higher priority to do than indiscriminate reading, sometimes it is simply because I cannot read the language. I’ve seen plenty of people like posts on Facebook based on the poster, only occasionally taking into consideration the first word of the post in question, before actually reading them.

Yes, the proliferation of “liking” on Facebook bothers me. I don’t expect everybody to reply meaningfully to everything when they just want to express approval lightly. However, when I see that tiny minority of people handing them out to people in their own threads like programs at a concert, I become indignant. Under their influence, what was originally a straightforward, meaningful badge of appreciation becomes a handwavy gesture that carries virtually no weight, and then I don’t know what to do when I see something I like seriously. Will clicking that button still express the feeling strongly enough?

I accept that, in our stressful world, a few instant effortless gags that take ten seconds to fully process and approve deserve a place. Nevertheless, the number of people who seem to want to make the “like” a completely passive and automatic action is almost physically painful: 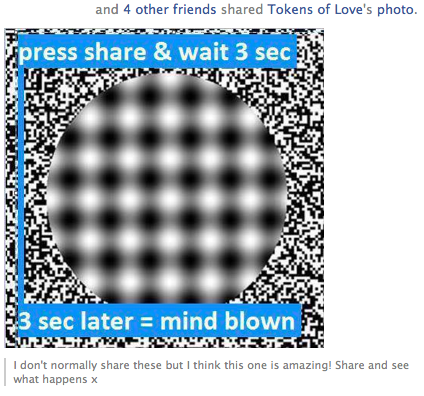 Aside from being insignificant, the meaning that can be conveyed in a “like” is also very one-dimensional, which is a problem because there are many variants of approval. The most basic opinion is probably “I think this post is worth reading!”, based on some combination of usefulness, beauty, or amusement. Then there’s “I agree!”-liking in arguments, “I feel you, bro”-liking for emotional statuses (which can be further divided into shared enthusiasm and sympathy), or “Nice to hear from you” for people posting from distant events… none of which necessarily imply post quality. And finally, there appears to be “I have seen this, thanks” when somebody is collecting information from everybody, which generally means a post that matters to zero other people. Assigning all this to a single verb and making their notifications and appearances identical can make online interactions very confusing.

Outside of Facebook, I also encounter strange WordPress “like”s from people I have never heard of before. Is this how the blogosphere works? I have not yet been able to figure out anything, except for ownership of a WP account, that could possibly link those people and me. I have likes from bloggers who deal with educational apps for children, scenic photography, airports… these are the ones I have been able to figure out. I can’t imagine my posts could have any content that would interest such people, unlike acquaintances who (okay, I admit) probably don’t get my thought processes either but at least have a little social imperative for checking them out. The value of these “like”s are even harder to determine, because I have no idea what sort of “liking” tendencies this person has shown on the rest of the internet. He or she could just be idly liking every post with “Twitter” in the post title because s/he just discovered it and thought this would be a cool action to take. Or maybe it was an accidental click while s/he got distracted dealing with a pet cat or something and decided, even after reading the post and being unable to find anything redeeming in it, that the mere possibility of giving some poor soul a notification with “Somebody liked your post!”, one glimmer of recognition and acceptance in a sea of overwhelmingly impassive denial, and then having him realize that it was later taken back would be too soul-crushing. Or he/she could be a professional scriptwriter with serious literary standards who saw something special. How could I tell the difference when my only leads are completely bare Gravatar pages?

So in the end, I just assume that they are all most likely to be flukes. Even if somebody genuinely found something they like, they’re not going to come back because I’m just another guy, one unremarkable dot in the big wide blogosphere. Any of them could easily find thousands of blogs out there with equally fascinating, not to mention more relevant, posts.

No matter what platform they come on, well-written comments are far more meaningful and rationally gratifying: it’s nearly impossible to misrepresent the implicit message in a comment that says, “I am an intelligent being and I have read and comprehended your post.” It took me a little serious effort to put these words down, and it gladdens me to know that the effort affected somebody strongly enough to elicit a response. The little detail they latched onto, the runaway allusion they understood, the mutual emotion they experienced… it means my words, composed in figurative sweat and tears, had influence. Certainly I cannot deduce anything like that from a semiautomatic click of a button that can be performed in a fraction of a second.

But, as is quite clear, I don’t get that many comments, presumably because I don’t write stuff that people want to bother to read, maybe because I still repress some of the most brutally honest and provocative parts of my thoughts, or maybe because I write this cryptic indecipherable nutty prose because my juvenile subconscious still thinks being cryptic is cool. There are other options… for instance I could follow the blogging tip that advises me to end my posts with an open-ended question, so that I have a chance to “engage with my readership”, but that just feels like a cop-out to me, and it only makes things more awkward when nobody responds. And I can’t complain because I don’t spend months in an isolated mountain cottage on each paragraph or anything.

In view of all this, as well as the copious amounts of time I burn online looking for stuff to read, why haven’t I slathered the blogosphere with accolades already?

I have been trying harder lately, and I’m quite sure that most people would really enjoy getting comments for the same reasons I do — in fact, sometimes a well-thought-out comment for all their effort seems nothing short of deserved — yet as a commenter, I have countless other excuses for holding back. For one thing, often I don’t have anything meaningful to add to the conversation. A well-written comment implies somebody read the post in depth, but for some simpler posts I find the converse is far from true. Sometimes I don’t see anything out of the ordinary I can actually comment on, even though I still want to pay my respect for the effort I see. What then? Is a bland, brief comment such as “Cool post!” ever justified? I think I’d prefer getting liked over that, because the feeling in them is approximately the same, and spambots routinely come up with better-quality comments:

Hiya, I’m really glad I’ve found this information. Today bloggers publish just about gossips and web and this is really annoying. A good web site with exciting content, this is what I need. Thank you for keeping this web-site, I’ll be visiting it. Do you do newsletters? Cant find it.

I am really inspired with your writing skills and also with the format to your blog. Is this a paid theme or did you customize it yourself? Anyway keep up the nice high quality writing, it’s uncommon to peer a nice weblog like this one today..

I do not usually answer posts but I am going to in this case, great information?- I will certainly bookmark your site. Keep up the good operate!’s a Also, I have shared your website in my social networks! post.

And this is for comments from and to people I kind of know well— what about commenting on the blogs I randomly stumbled upon by people on the other side of the planet? I expect many established writers would already have enough strange visitors from all over the world to not get freaked out by one additional wandering guy, but I’m still too socially awkward to suddenly appear unannounced among a crowd that seems to know what everybody else is talking about. And while commenting, do I have the audacity to link to my own inchoate mess of a blog? The super-optimistic part of me thinks interested people will actually find my blog that way and come over! Never mind that the very existence of such interested people becomes more debatable with each passing post.

It’s difficult. Sometimes I don’t know why I make such a big deal out of this spare-time reading done when I’m mainly trying to relax, but it seems a built-in part of my social interaction mindset. This is why I envy the people who never seem to have any difficulty wising up to strangers, who can just saunter up to people they’ve never before met in their lives and act like old acquaintances. Because even through the safety net of the web’s remoteness, with full knowledge of the fact that I’m a thousand times more likely to make a stranger’s day than to hurt somebody even if I accidentally miss a subtle connotation in my chosen wording (or, Zarquon forbid, a grammar mistake… shudder) I still can’t do it.

In any case, even though I may never know for sure whether or not any reader seriously read this post or managed to understand anything I was trying to say here after far too many revisions, I hope that you as a reader knows it means something to me.

There we go, pretending an audience for this blog exists again.