Sixth year hunting with ✈✈✈ Galactic Trendsetters ✈✈✈! As last year’s writing team (previously: 2020, 2019, 2018, 2017, 2016, writing with Random in 2015) we had one final responsibility: running the traditional How to Hunt workshop shortly before this year’s hunt. I didn’t play a huge role in that, but I lurked and reminded myself some things about how new puzzlehunters think about puzzles, and I wrote Yet Another Puzzlehunt Spreadsheet Tutorial after casting around and being not entirely satisfied with the puzzlehunting spreadsheet tutorials I found. I think I actually understand ARRAYFORMULA now.

And then, before we knew it, it was Hunt again.

It’s really nice to get to solve Mystery Hunt again, and especially nice to do so on a team that was fairly actively trying not to win. GT generally tried not to add too many members this year, with some affiliated folks splitting off or hunting with other teams. During the hunt itself, we avoided backsolving puzzles that people were enjoying forward-solving, and encouraged people to be more confident before guessing answers. We ended up with a >50% guess accuracy1, much higher than some of our past participations, and at least for the puzzles I participated in that took more than a few incorrect answers, I think they were all reasonable guesses or honest mistakes (VALLICELLIANA is difficult to spell) rather than attempts at short-circuiting.

Personally, I did the hunt as part of a roughly 10-person west coast contingent who met up in real life (and who all tested negative for COVID shortly before or after arrival). I think I got roughly three times as much sleep as I did during the 2020 hunt, when we won, and I felt freer to hop onto puzzles that were greatly oversaturated with solvers, such as A Number of Games and How to Install a Handle, or to try less hard looking for extraction steps after doing the fun meat of a puzzle. I think a lot of team members took a similar approach; based on our solve log, we solved no metas between 3am and noon (ET) on either day, and generally had much starker dead zones of activity in the mornings than in past years.

Note: if you are viewing this shortly after it’s published and somehow don’t want to be spoiled on Mystery Hunt, make sure this spoiler formatting shows up: this text should be spoilered; if it doesn’t, try shift-refreshing. (There are Correct Ways to fix this, but I’m too lazy to do them. Sorry.)

Somehow, it slipped my mind until trying to write the 2020 year-end post that I’d probably want to write a post on all this. In fact, there was one major project that I started in 2019, but that I didn’t think of mentioning in my 2019 year-end post because it wasn’t ready to be announced at that time, and that I almost forgot that I had never mentioned. But this post is a pretty good place to announce it.

Planning Mystery Hunt is a massive year-long endeavor. I didn’t have any leadership or otherwise high-responsibility roles, which made sense because I was busy writing a masters thesis for the first four months of Mystery Hunt planning. Because of that, and because I know many many other people on our team have written and will be writing blog posts (Rahul’s post, Nathan’s post, CJ’s post, maybe more to come?) I will focus on the things I did specifically. (So there is minimal discussion of the theme, overall organization, or big decisions like our COVID-19 response; I think the linked posts cover these well already.)

One part I did largely have “ownership” of, and that I sank a lot of time into, was maintaining our software for writing puzzles — the website where authors submitted puzzle ideas and drafts, testsolvers tested puzzles, and editors tracked and discussed the statuses of all the puzzles. This role was largely a continuation of me owning the same component for Galactic Puzzle Hunt since 2018, which itself grew out of the comparative advantage of having worked on it a little when writing with Random Fish for the 2015 MIT Mystery Hunt. There is some life lesson about specialization or pigeonholing to be learned here. But, to start at the beginning:

Puzzletron is a piece of PHP software used for organizing puzzle writing for puzzlehunts. The first commit on GitHub says it was imported from Metaphysical Plant in 2011; it’s likely older. There are active commits each year until January 2018, and AMA responses from Setec (2019) and Left Out (2020) mentioning it, so I believe most if not all Mystery Hunt writing teams used and improved Puzzletron and passed it down over those years.

Not a very completionist run. I graded myself pretty strictly though — both sides of every “and” need to count; “all” means literally all; fuzzy actions and phrases require full psychological commitment to qualify. 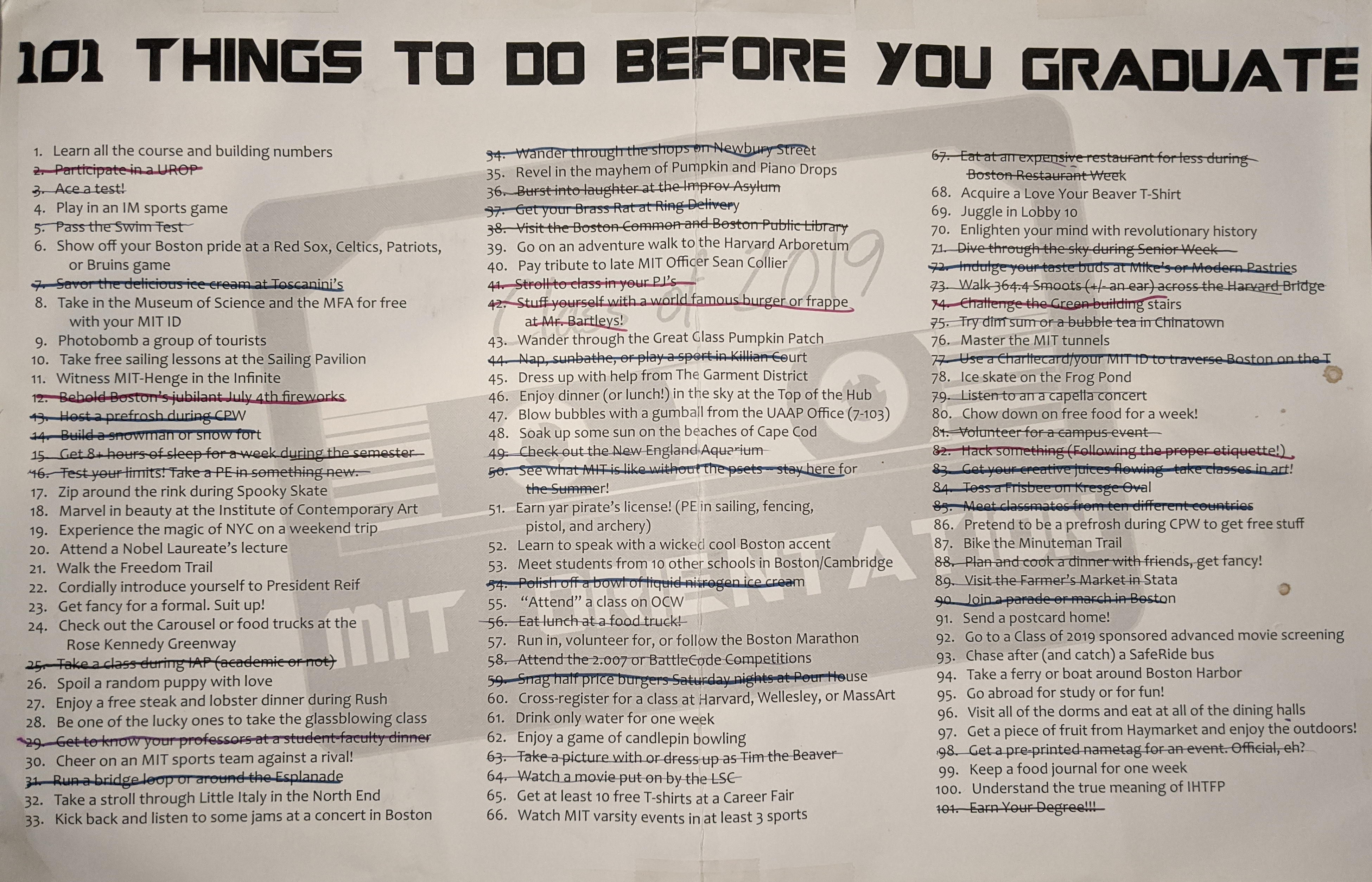 But apparently I’m still really busy, so I’ll probably just focus on a few highlights of things I personally experienced and get this post out the door.

The theme in a few sentences: As suggested by the invitation sent out to teams, there was a wedding. It turned out to actually be a real wedding between two prolific puzzle writers on Left Out, the organizing team. To the surprise of everybody who expected either one, three, or maybe five subversions of this announcement, the wedding actually succeeded (a COIN that would prevent all love in the universe was briefly reported missing, but then immediately found by the bride). Instead, we joined the newlyweds on a trip to an amusement park called Penny Park, which we learned was struggling and closing this weekend. It was up to help its regain its popularity and stay open by solving puzzles. The Mystery Hunt subreddit has lots of other cool links and discussions, including this animated bar chart, so I won’t spend more time here.

I’m pretty sure the best story I personally experienced was how we solved the metameta, the biggest puzzle that stood between us and winning hunt, and the moment at which we went, holy smokes we might have won Mystery Hunt! We got all the pennies required for the final metameta at Sunday 5:48:09am, and it took us until 12:47:30pm, just under seven hours later, to solve it…

Fourth year with ✈✈✈ Galactic Trendsetters ✈✈✈. Past: 2018, 2017, 2016, writing with Random in 2015). Evidently I was unable to find the time or motivation to blog about this, and I can’t remember any particularly good stories, so let me just slip this backdated list post in the archives.

The theme in a few sentences: The hunt organizers declare a new Molasses Awareness Day, but because they didn’t follow the proper procedure, throwing the world of Holidays into chaos, where “chaos” means molasses. This resulted in lots of puzzle-to-meta matching, since puzzles were in Holiday towns but metas were at lampposts between two towns.

Highlights of puzzles I solved:

My third MIT Mystery Hunt with ✈✈✈ Galactic Trendsetters ✈✈✈ (also see: 2017 and 2016, writing with Random in 2015). It was a good hunt with a fun theme, solid puzzles, and extraordinary production quality, marred only by a fickle unlock structure and a handful of unnecessarily involved extractions.

Since we had been told the hunt would be smaller than past years’ (now a controversial statement since the coin was not found particularly early) and we didn’t particularly want to win (yet), part of our team temporarily split off this year to hunt as Teammate. Based on our Discord channel, ✈✈✈ Galactic Trendsetters ✈✈✈ had 75 people this year, including remote solvers and people who dropped in and out.

A short description of the hunt structure: This year’s hunt theme was Inside Out, the Disney movie about anthropomorphized emotions. This was revealed through a kickoff that demonstrated the hunt’s extraordinary production quality, in which we watched the unveiling of the Health & Safety hunt, first directly, then in the Control Room with the emotions of a distraught hunter (Miss Terry Hunter) and a lot of beautiful memory orbs and scenery. After Terry’s emotions became overwhelmed in response to the theme, we had to help her emotions to allow her to complete the Health & Safety hunt. The intro round took place in the Control Room; we had to solve 34 regular puzzles and five metapuzzles (somewhat overlapping, with some regular puzzles belonging to more than one metapuzzle) to help each of the five emotions get back to the Control Room. The rest of the hunt consisted of recovering memory orbs from each of four Islands of Personality, each of which had its own theme and meta structure, and which we could choose the unlock order of.

And it’s not even January any more.

(Thing negative two: Thing zero, which is at the bottom of this post, contains two puzzles by me. Skip there if that sounds interesting and text walls don’t.)

Thing negative one: I abandoned this blog (again). The last month has been a mess and much of it is political stuff of the sort that I’m the worst/slowest at writing about.

Thing one: I was on-site for a second MIT Mystery Hunt.

When I first made myself commit to posting weekly, I was trying to make myself spend a little time every day of the week thinking and writing and whittling away at old drafts. Instead I’m here at 10:40 PM basically starting a brand-new post. Oh well.

I last blogged about music in 2013. I tagged two other posts with “music” since then, but neither is particularly deep: 8 Songs for 18 Years and Drop-In Filler. Let’s continue the tradition of self-analysis part IIs from nowhere…

I meditated a little bit in Conversations about “lacking experience or interest in a lot of the commonly discussed culture.” I think this applies to me and music as well, although not as fully. Back in Taiwan, when mentally bracing myself for coming to the U.S. for college, I sometimes worried about not knowing enough about pop music and bands and not listening enough to popular albums, and having trouble integrating into the culture for this.

Turns out, among the communities I wandered into and friends I made, it was a more frequent obstacle that I didn’t know enough about classical music and composers. Whoops. Some of the names rang faint bells from either music class or conversations with high school friends who did do classical music, but I could not identify or remember any styles or eras, and would remember composers only by unreliable first letters or unusual substrings of their names.

(all the times that you beat me unconscious I forgive)

We’re overdue for one of these posts, I guess.

I feel more in control of my living quarters. Marginally. Guess I’ll be fine.

Pros and cons of having a departmental advisor in your area of interest:

I finally did it.

I was on-site for the 2016 MIT Mystery Hunt. I even solved a metapuzzle. This year I hunted with ✈✈✈ Galactic Trendsetters ✈✈✈, the team primarily but not overwhelmingly formed from floorpi, my dorm floor. (Perhaps somewhat regrettably, I didn’t contribute to any events or runarounds or things given to HQ, unless you count attending a “recitation” for Student Simulator (round King Arthur, second from left).)

(Also, I made this post. Has it been two weeks already? Okay, that’s not an unusual timeframe.)

But wow, I got to touch so many puzzles.

Non-spoilery comments on particularly memorable puzzles I did, which are disproportionately programming-related, if anybody wants to look at them (I am describing how to get to the puzzle from the round instead of linking because I’m lazy and links might rot but the instructions will hopefully survive archival (although turns out there’s actually a table of contents so I don’t know what I’m doing)):