There are two good reasons:

To elaborate: Test #3 included one strange output-only hodgepodge problem of probability and combinatorial design tasks, and one combinatorial enumeration problem involving the Fibonacci sequence which then required some optimizations with number theory. Test #4 included two geometric problems, one somewhat standard and one somewhat “creative” (the last test case was a height map of Taiwan with our four nuclear power plants labeled.) Of course, since geometry on computers is always coordinate geometry, there was plenty of algebra in those problems too. So, in other words, these two tests pretty much covered all four math olympiad subject fields (otherwise known as silver cyanide) between them.

The story of problem 4.3 is so exciting that I’m going to tell it here. If geometry and estimates of asymptotic time complexity are not your sort of thing, you probably want to skip to the end of this post. There’s a mysterious fun animated bar graph there.

There’s an infinite convex polygonal line of N points, given to you with the coordinates of the points. Rigorously: there are at least 3 points, their x-coordinates strictly increase, and the slopes of the segments connecting each point to the next strictly increase as well. The first and last segments given are to be extended infinitely to the left and right. There’s also a “central point” specified above this polygonal line. Find the minimum possible area bounded by some line passing through the central point and the polygonal line. 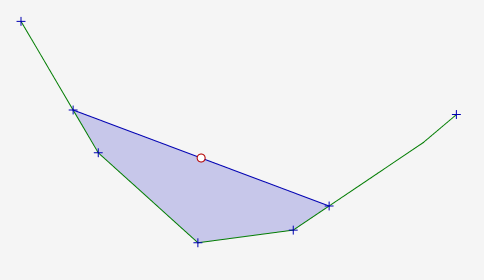 I drew a crappy freehand diagram and came up with the neat synthetic property hidden in the problem requirement: The central point had to be equidistant from the solution line’s intersections with the polygonal line.

The reason is that that’s where marginal benefit equals marginal cost. If you rotate the line a little dθ one way or the other, the change in area will be proportional to the square of the ratio of the distances from the central point to the places where the cut line intersects the polygonal line. Law of sines, vertical angles, economics 101. Boom! 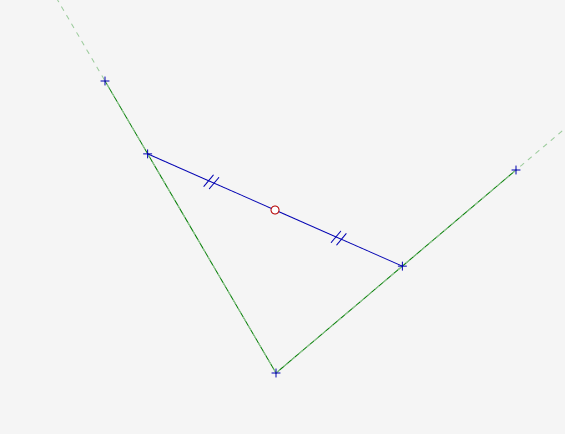 Good job, me from the past.

omgwtfbbq are you doing, me from the past. 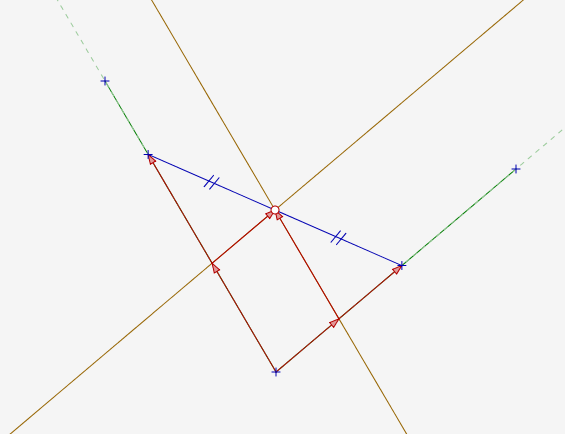 After discovering that, being the brilliant geometric impostor that I am, I decided to just check all \(\binom{n}{2}\) pairs by extending them, solving them as above, and checking if the answers were inside the actual segments, resulting in an at-least-quadratic-time brute-force. 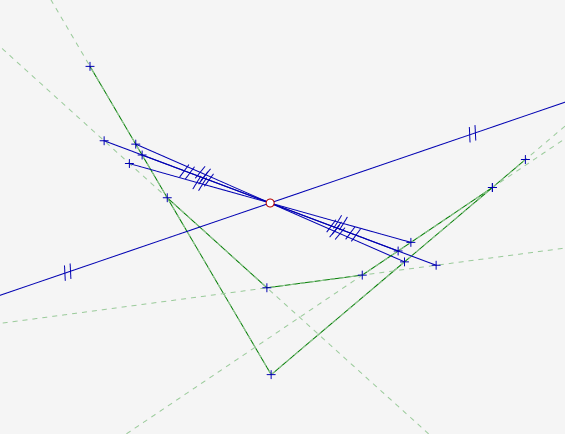 This solved the first two subtasks, so I proceeded to bash the third by pretending it was “almost” monotonic. Intuitively I thought it was monotonic and the bruteforcing could be made linear by a two-pointer sweep, but after messing with it a little bit, I didn’t quite get it working and lacked the geometric finesse to figure out why. So I just brute-forced a bunch of extra combinations past the second pointer.

I was about to give up and switch to making up solutions for Problem 4, until I backtracked on a faint suspicion and realized that the Wrong Answer and the Time Limit Exceeded were on different testcases.

So I set the magic number to 260 and got a mostly undeserved 25/25! Hooray! (This was only somewhat overshadowed by the fact that my score at that point was already enough to guarantee me a spot on the team, as long as our unofficial scores were accurate.)

The wallbash-worthy thing, which I learned after the contest, was of course that the intended solution was much simpler, eliminating the need for any linear transformation magic as well as any concerns about brute force and monotonicity in one fell swoop. And I was so close, too.

All that was necessary was to reflect the polygonal line about the central point. 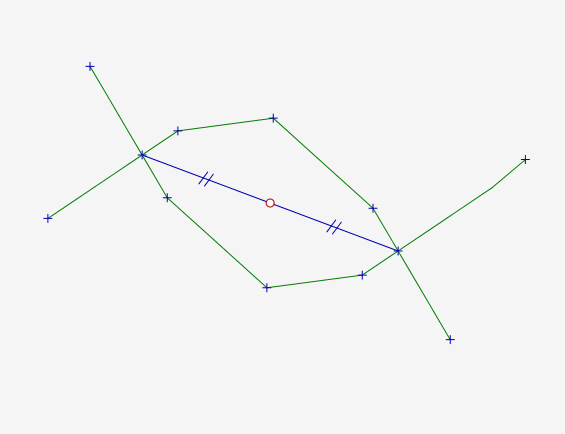 Hindsight facepalm: in any synthetic geometry configuration, that midpoint should have been an immediate trigger for applying one of a long list of geometric transformations and auxiliary lines. I had completely forgotten about those triggers, probably because I never expected to use them again and I had replaced them with a few programming-competition triggers that had to almost always fire. So far, I only have two:

Maybe I’m just not very good at lines rotating around points… (Yes, that’s a link to the same problem.)

And so it ends. Or is it a beginning? I made it. I’m going to the 2014 International Olympiad in Informatics. There are several consequences.

It’s too early to get carried away, though, because there’s another beast to slay before then. Four more, in fact, that I can think of right now, which all begin with “AP”:

Yes, okay, fine, I should be studying or practicing. As usual.