A fun/interesting/unfortunate/fortunate consequence of the mental world model of Inside Out (2015 Pixar film) (which is a great movie, and I’m saying this as a non-movie-type — I laughed, and I cried, and just omgwtfbbq Disney/Pixar) is that imaginary friends that are capable of autonomous flight are probably immune to being forgotten.

People are afraid of the dark because it holds the unknown and unknowns are scary. But maybe it is just as frightening if we let the light shine everywhere and believe that because we know everything the light shines on we know everything. Perhaps for once when the sun fades over the horizon and the darkness returns in its dependable cycle we should silence the fears and remember there is darkness in all of us

Generally, when people I don’t already know through math competitions ask me or my parents about something like how to teach their intelligent child to make em really good at math, or even English or whatever, I am skeptical by default because there seem to be a lot of Taiwanese parents who have alarmingly rigid and largely baseless expectations or assumptions about what their children ought to be interested in and excel at.

You can lead a horse to water, and honestly I think you could find a way to force it to drink if you really wanted to, but you can’t make it enjoy the process of being force-fed. Um. Force-watered? Force-hydrated?

You can teach your child math and English, and you could make em ace all eir tests, but you probably can’t make em enjoy the test so much that e decides to create more diabolical versions of these tests to give to eir fictional characters in eir stories for fun!

These are all actual illustrations from the old stories I mentioned in part 2.5 of “More Fiction”. Stories I wrote in 2004. As a first-grader.

This is kind of horrifying. 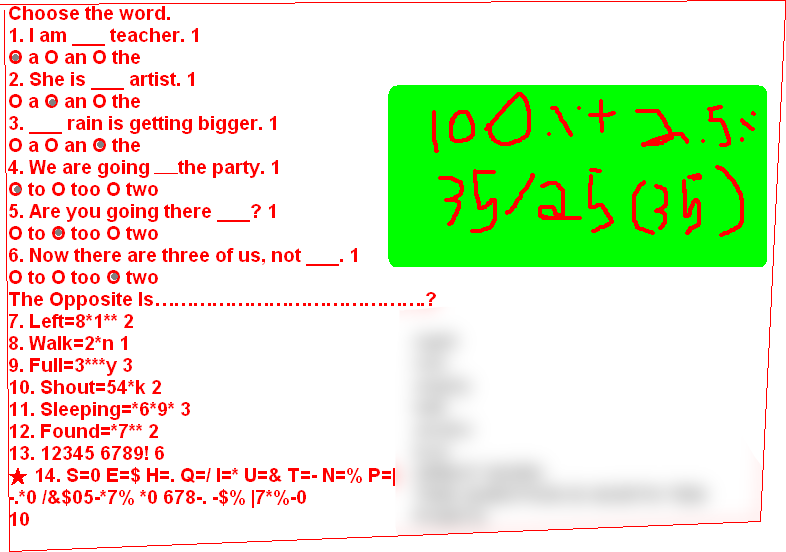 This is not Part 3. It’s just two things I thought of tacking on to part 2.

What can I say? Part 2s are easy blog post fodder; Part 2 appendixes are even easier.

It’s olympiad season. Taiwan placed 18th in the IMO rankings1. Next day there are news stories about how it’s our “third worst performance in history”, and commenters drawing casual arrows from changes in Taiwan’s standardized tests and curriculum to this result, and the Ministry of Education saying they’d review their procedures or something. What. Did you forget our performance last year? Do you think our olympiad training system is completely overhauled on an annual basis, or has even a tangential relationship with the overall education system?

My mom says I blog too much about myself. I am completely guilty of that and this post is mostly not an exception. Sorry.

It’s not that I wouldn’t like to write posts about others and for others. But I know more about myself so obviously there’s more I can write about myself. It’s kind of a habit, and it’s been a very personally helpful habit. I discover lots of things when I write introspectively. But I’m a very weird person and a lot of the insightful things I discover when doing this are things I doubt I can generalize to other people. I tried getting a lot of my friends to join HabitRPG when I discovered it, but it was nowhere as effective on them as it was on me.

All through high school I had really high standards for myself. Not the grades, mind you (I admit, humblebrag, my grades were always uncomfortably high, probably as an expected but still sad byproduct of this process (yes, I’m actually complaining about grades being too high. I don’t want my report card to have lots of Bs or Cs, but I really didn’t need to pour enough resources into schoolwork that I graduated as valedictorian, when there were so many other personally and socially meaningful things I could be dedicating effort into creating — but that’s a subject for another post (humblebrags all the way down. Somebody get some internet pitchforks and poke some sense into me))), but simply how I managed my time for doing homework.

In my opinion: not very well. I always spent too much time surfing the internet and doing things less urgent than homework, then ended up sleeping at midnight or one o’clock or whenever often to finish what I should have done earlier.

And yet, compared to many of my friends (definitely not all, though), that’s not late at all and the amount of buffer time I had between finishing work and having it due was positively luxurious. But then, I suppose, I didn’t have the same amount of math homework. But to counter my excuse, I had additional responsibilities such as practicing olympiad problems and preparing weekend presentations and translating the school newsletter. So I don’t actually know if my workload was significantly lighter than average or not, ergo I don’t know whether my time management skills were significantly better than average or not. It seriously doesn’t feel like they would be.

And allegedly, even when I’m procrastinating, it’s more productive than my friends’ procrastination, maybe even Paul Graham’s good type of procrastination. Often when I gripe about how much my former self procrastinated they will ask me what I’ve been doing and, after hearing the answer, tell me this. What have I done to put off homework? Oh, I did some olympiad math problems, committed to my GitHub projects, read a bunch of programming blogs, organized my old chemistry notes from two years ago, and surfed the Stanford Encyclopedia of Philosophy. Yeah. Total waste of time. Meanwhile certain friends surf 9GAG whenever they get the chance. (Which is not to say that I don’t procrastinate in obviously unproductive ways sometimes — I surf reddit, YouTube, and TVTropes of course. Sometimes I even just read my own blog or dig through old folders in my computer. I’m weird. But anyway.)

If you came to this blog or this post hoping to read English, sorry not sorry. It’s only fair, really, given how many people on Facebook can’t read the massive English textwall posts I’ve spammed them with for so long.

I’ll probably be making filler posts for a while until I make decent progress on linear algebra and programming work, including another presentation.

Let’s listen to some more music.

Part 1 was here. This is still part of the daily posting streak I have openly committed to and standard disclaimers still apply. Just as in my original post, back to the flip side — let’s see what I have to do to write fiction to my own satisfaction. And this time I have a guide: the list I made in the first part of this post. Could I create fiction I would enjoy reading?

1: I enjoy calling things before they happen…

2: …I also enjoy the Reveal for questions when the author has done something clever I didn’t catch…

Well, obviously, I can’t predict things in my own plot. But I can develop riddles in the plot, set up expectations and drop subtle clues and use Chekhov’s Tropes. Can I?